These are just a few of the wagons that were on display at the Circus World Museum before the premiere of Water for Elephants in Baraboo. The Benzini Brothers is the fictitious name created for the story. The authentic wagons were shipped to Hollywood (along with the museum's director) where each one was painted for the film. After shooting was completed, the wagons came back to Baraboo. They will all eventually be restored to their original designs except for one which was created new just for the movie. 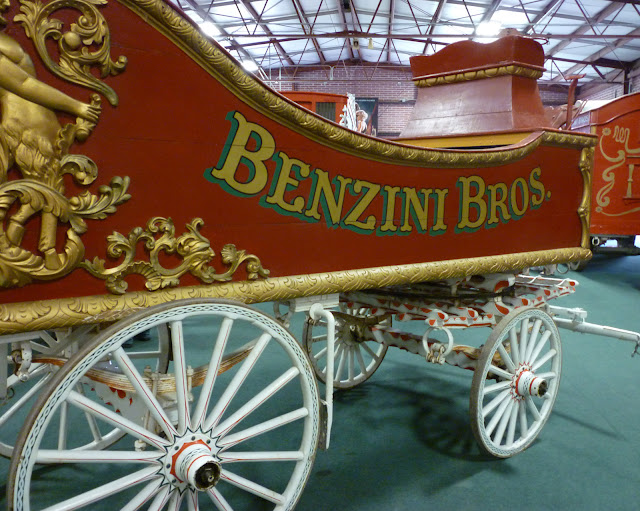 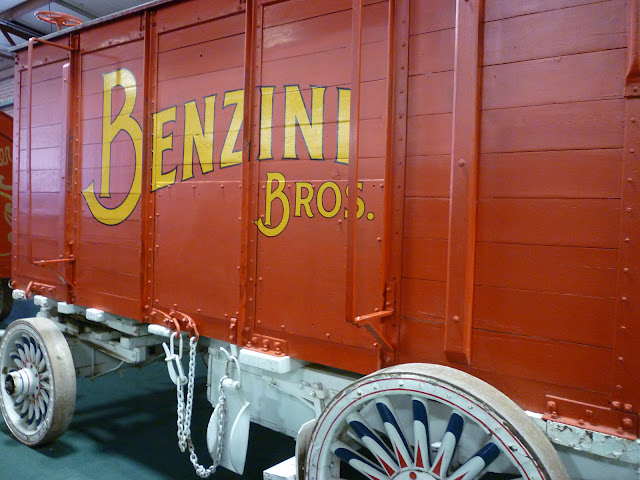 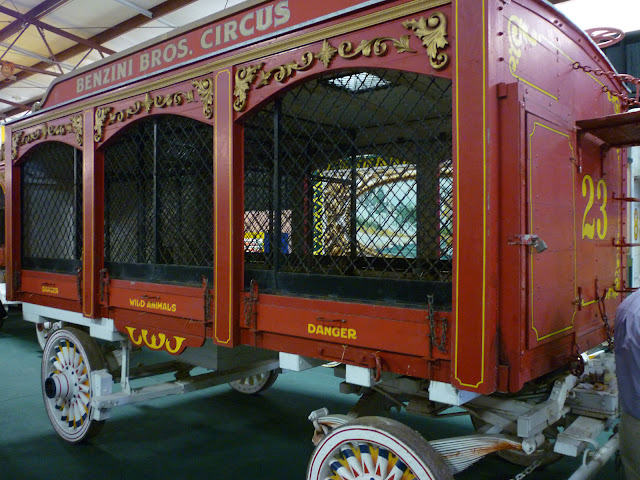 In addition to the Hollywood wagons, the Circus World Museum has an extensive collection of other authentic wagons from a variety of circus troupes including the Ringling Brothers. Here's just a few... 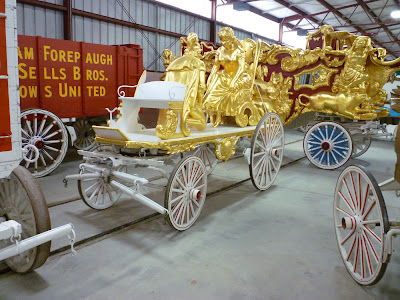 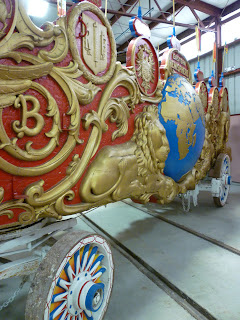 
One wagon in particular caught our attention, the snake wagon. It was used in parades where the snake lady would sit in the center between the glass windows while a menagerie of reptiles slithered about her... 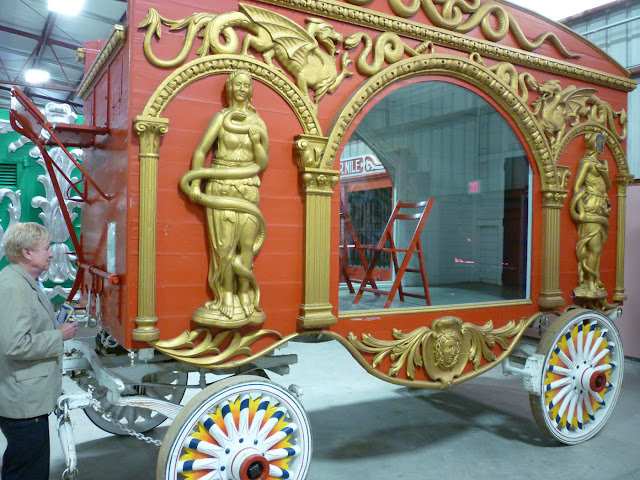 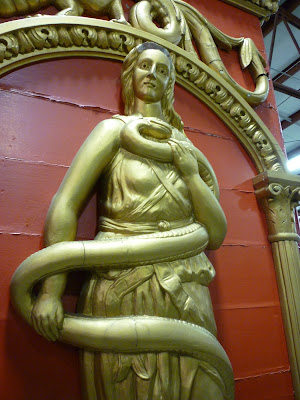 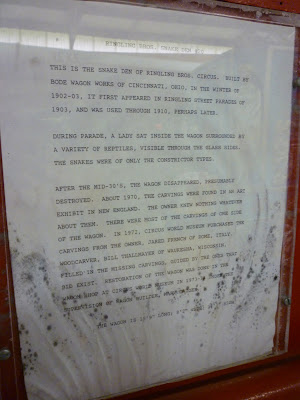 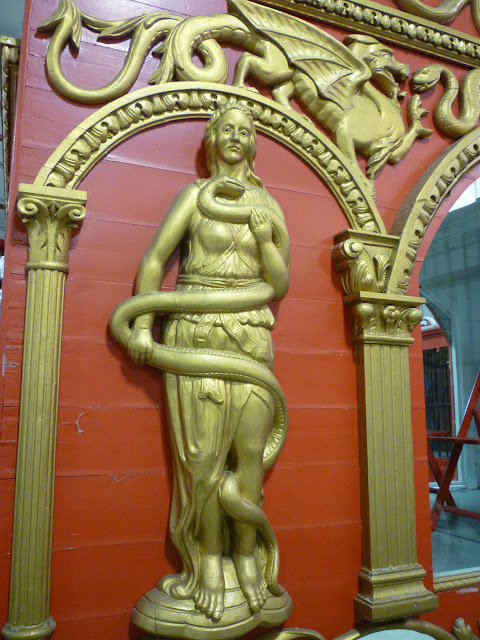 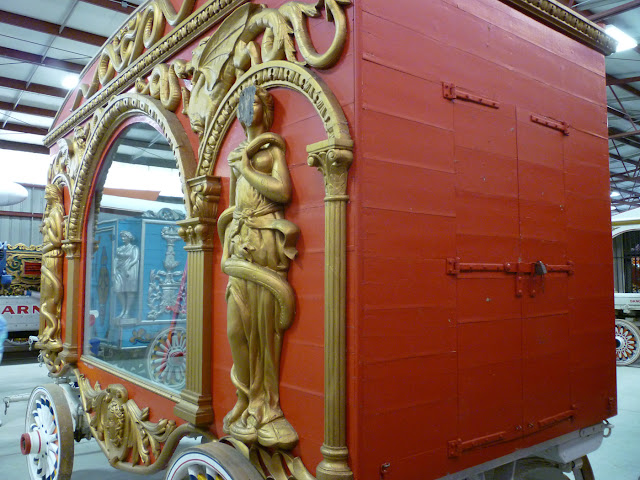 Recently, Robert and Colin Cameron attended the gala premiere of Water for Elephants at the Al Ringling Theatre in Baraboo, Wisconsin. Now you may ask, why in Baraboo? Because this was the home of the world famous Ringling Brothers Circus. 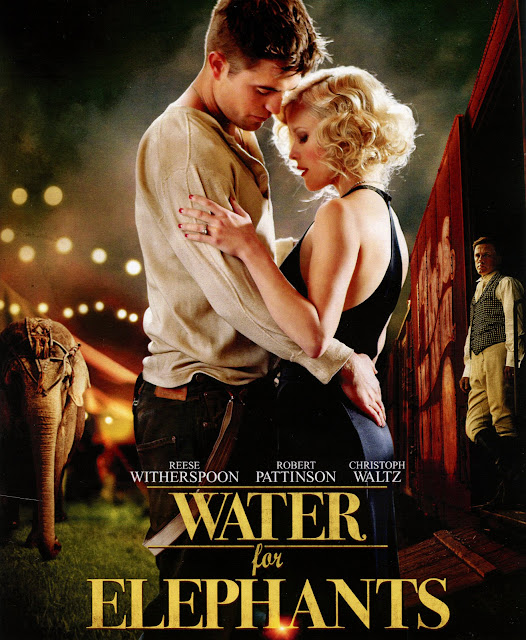 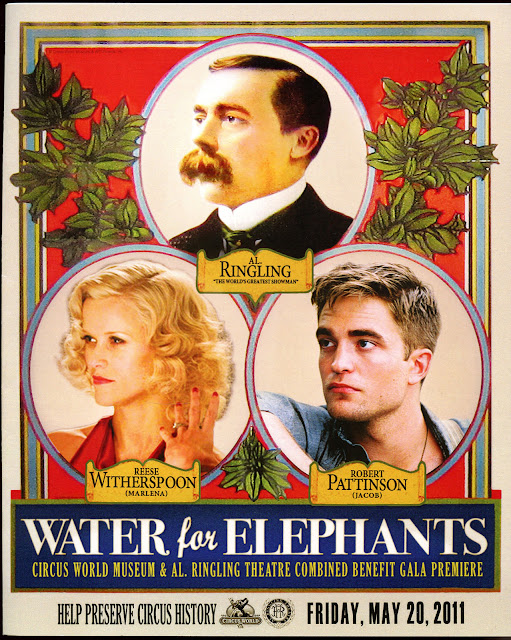 
Today, Baraboo hosts the Circus World Museum which actually loaned the authentic circus wagons and expertise to be used in this Hollywood production. 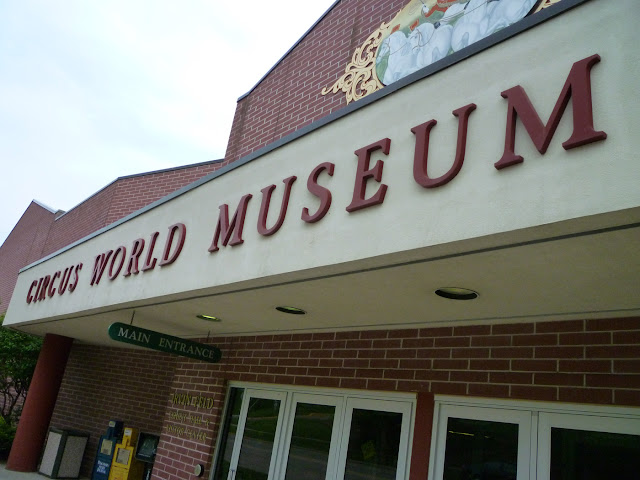 Also in Baraboo is the elegant and historic Al Ringling Theatre (where the screening took place). Built in 1915, the design was inspired by the opera house in the Petit Trianon of the Palace of Versailles near Paris. Al Ringling, the eldest of the 5 brothers paid $100,000 to have it built. 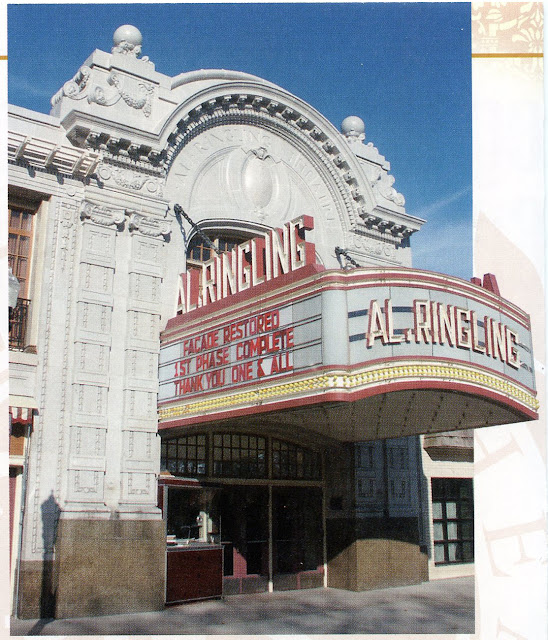 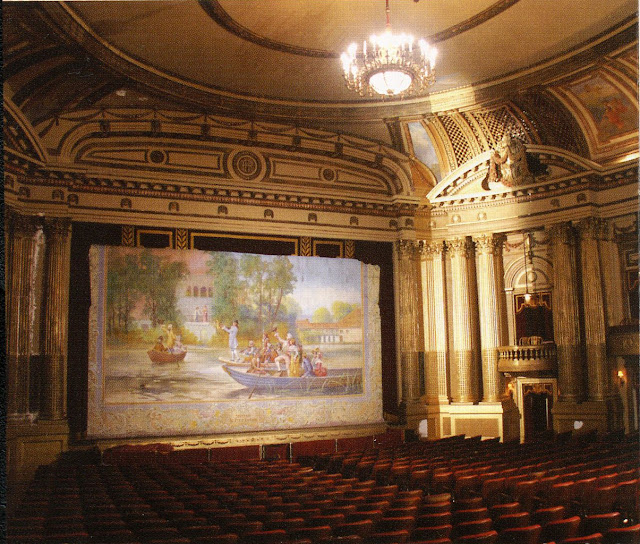 Proceeds from the screening went to support the museum and theatre, both non-profit organizations. Photos of the wagons at the Circus World Museum in upcoming post.
Posted by Tarazod Films at 2:13 PM 0 comments

We're still exploring the potential for an film idea that we had last year. It involves the work of the British writer Saki. If we were to move forward with the project, at some point we'd need to find specific locations to fit the period. So we had a little scouting recently.

One scene in particular calls for the hero to suddenly and unexpectedly stumble upon the antagonist--who is "illegally" lounging and sunning himself on a slap of rock at the far side of a pond. Locating a small body of water suitable for the shot has been a challenge since the scene calls for the antagonist to almost effortlessly bolt across the pond and stand face-to-face with the hero.

We visited a state nature preserve that features a deep gorge formed during the retreat of the last glacial period. There are potentially three separate locations within this gorge that could work for at least parts of the scene. None are perfect, but we'll certainly keep these in mind.

Location #1 actually features a shallow pond with a slab up against a rock wall on the far side. Yet, the slab is more of a shelf, narrow and slanted. Not an ideal spot for sunning one's self. 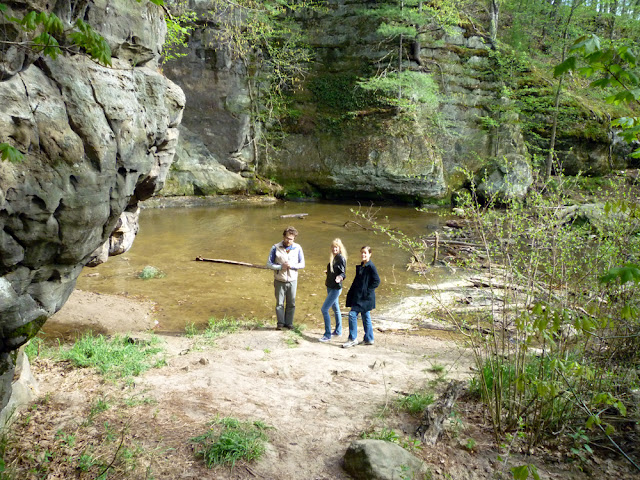 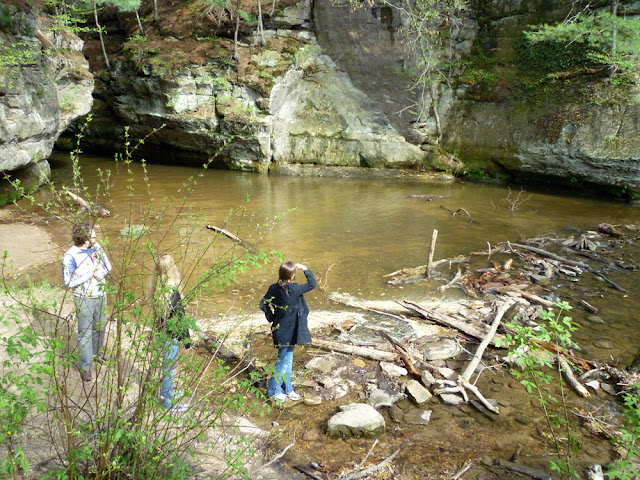 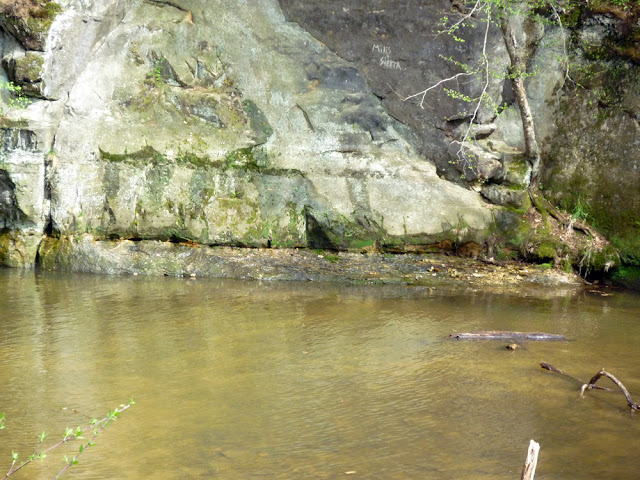 Location #2 is really a slow moving river rather than a pond, but we could cheat the shot if necessary to make it work. The "slab", however, where the antagonist rests is a small sandy beach, not a rock. 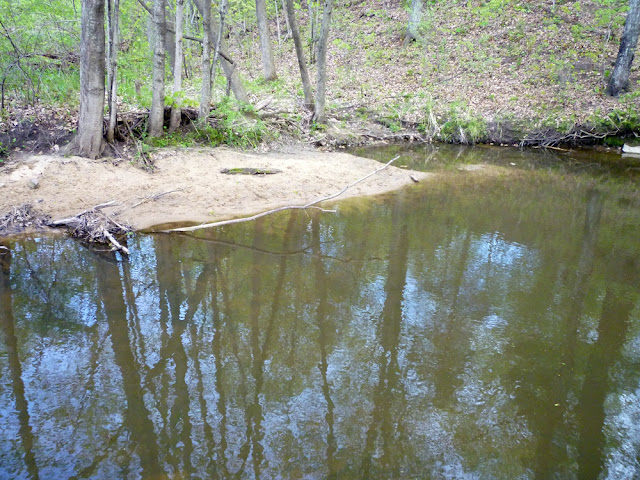 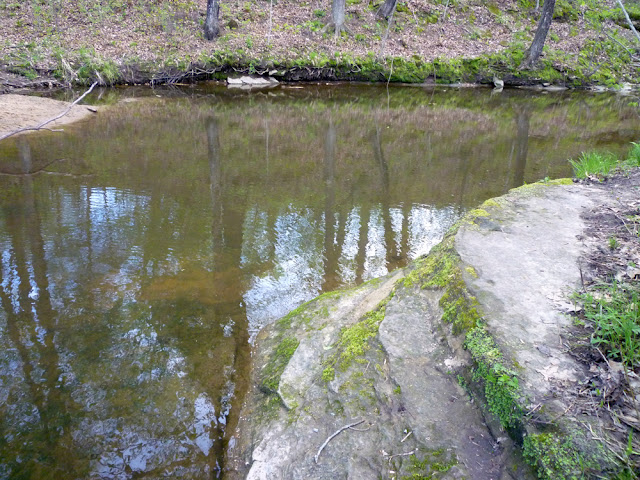 Location #3 is the same river just further downstream. There would be no disguising this as a pond, but the rock slab is the most believable sunning spot of the three. However, the algae growth on the river bottom makes any rapid crossing a hazardous affair (see video below). 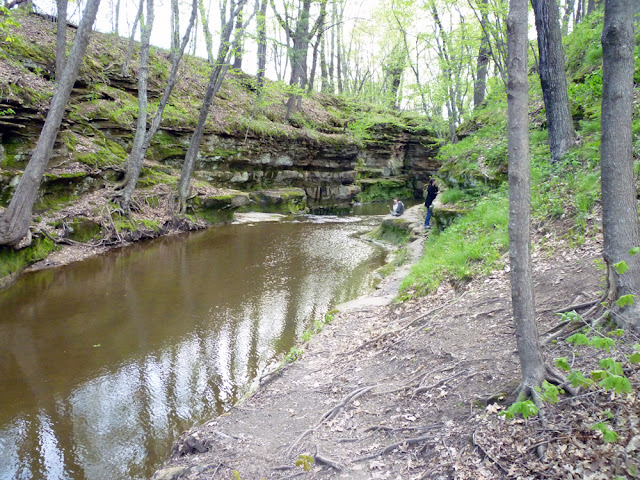 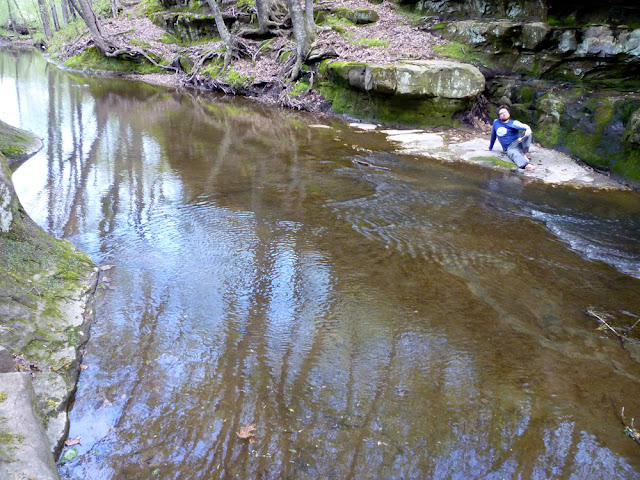 So in reality, not a one of these turned out to be what we're looking for, but we enjoyed the scouting nonetheless.
Posted by Tarazod Films at 2:06 PM 0 comments

Mad City Chickens will be screened in another one-day film festival sponsored by Hope Dance Films. This time it takes place on May 14th in Ventura, California. Film starts at 3:00 pm, Ventura Publc Library at the Topping Room.
Posted by Tarazod Films at 12:07 AM 0 comments

Article/Review of Our Film in Hobby Farms' "Chickens" Magazine! 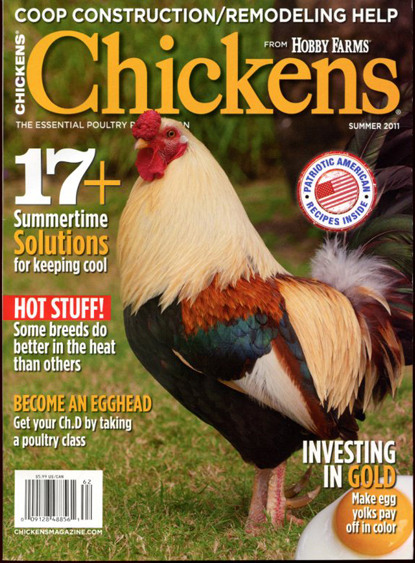 Recently, BowTie, Inc., the publishers of Hobby Farms, a popular periodical for the small-scale farmer and back-to-land enthusiast, came out with a brand new magazine. Hot of the presses, Chickens, is a response to the growing popularity of the backyard poultry movement.

We were contacted back in January by Rober Sipe, the editor of the new periodical, inquiring if he could interview us about our Mad City Chickens film and also if he coule have a review copy sent to him. We responded, but then kind of forgot about it all as time went by...until this month.

The new Chickens summer 2011 issue has hit the newsstands and our interview is featured in an article as well as a raving review of the film. Roger must have liked what he saw. Read the entire piece below. 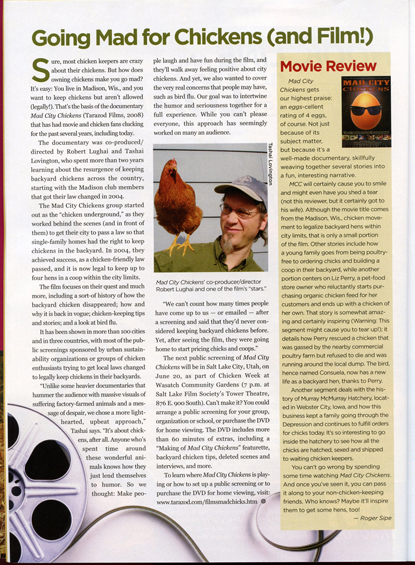 Posted by Tarazod Films at 9:28 AM 0 comments