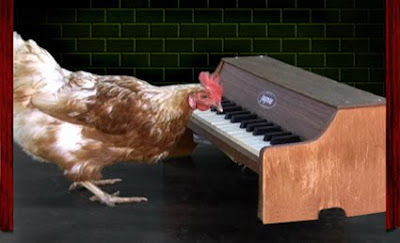 Nearly a year had elapsed since we’d last heard from James, Beanie’s trainer. The same amount of time had passed since Beanie’s Blog was last updated–May of 2008. So naturally, we began to wonder. Could something have happened? Did Beanie finally pluck her last note?
But all is well in Beanie’s world. James sent an email letting us know that Beanie (along with James) recently moved to a new home with plans for a great new coop called “Beanie’s Palace.” In fact, Beanie has several new poultry friends that are also interested in learning how to play the piano, Einy, Miney and Mo. (Meany was a rooster, who was voted off the property because he didn’t play well with others.)

You can catch both Beanie and James on the Mad City Chickens DVD as they both make an appearance in the film. And keep a watch for updates once Beanie begins posting on her blog again.
It’s good to know you’re doing fine Beanie!
Posted by Anonymous at 3:14 PM