It’s been a long time in the making, but the DVDs are now shipping. People are finally getting to see our Mad City Chickens film. Here’s one reaction from blogger Granny Annie.

Posted by Anonymous at 3:46 PM 0 comments

With the release of the Mad City Chickens documentary on DVD, chicken enthusiasts and the media are taking notice. Read the DVD review by Jane Burns in the publication, 77 Square. Also catch the Urbanchickens.net blog by Thomas Kriese.

Posted by Anonymous at 3:58 PM 0 comments

Mad City Chickens is finally on DVD! Order it from our tarazod.com shop. 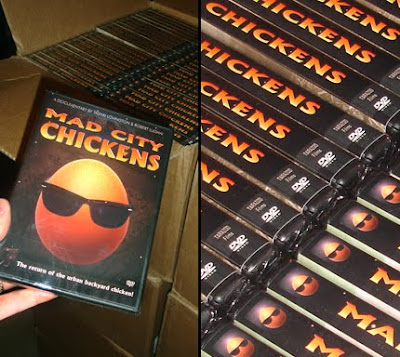 Three years in the making, the 79 minute documentary is a sometimes wacky, sometimes serious look at the people who keep urban chickens in their backyards. From chicken experts and authors to a rescued landfill hen or an inexperienced family that decides to take the poultry plunge—and even a mad scientist and giant hen take to the streets—it’s a humorous and heartfelt trip through the world of backyard chickendom.


SPECIAL DVD RELEASE BONUS: Order your copy of the film before Wednesday March 25th, 2009 at 11:59 pm (Central Time) and get two bonus promotions:

Celebrate the return of the backyard chicken with buttons, bumper stickers and t-shirts…oh my! Coming soon to our tarazod.com online shop.

Mad City Chickens DVD is Less Than A Week Away! 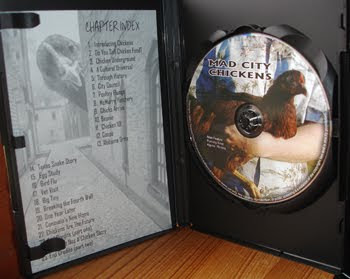 The countdown is almost complete to the release of the Mad City Chickens DVD! March 24th, 2009!

You can pre-order your copy now from our tarazod.com website.
Posted by Anonymous at 4:01 PM 0 comments

We were recently contacted in regards to holding a public screening of Mad City Chickens in Toronto. Details TBA. It is being sponsored by Toronto Chickens, a group that is working to get the outdated zoning laws changed to allow backyard hens.

We met with Jane Burns this morning, the DVD reviewer for the publication, 77 Square. The topic of conversation? The upcoming DVD release of the Mad City Chickens documentary. Look for the review to come out around the release date of March 24th.
Posted by Anonymous at 9:00 PM 0 comments

The Mad City Chickens documentary screens at 6:30 pm tonight March 10th at the Green Tuesdays Films and Lectures Series in Monona, Wisconsin. It’s of interest that the city of Monona does not yet allow the keeping of urban backyard poultry so the screening is being sponsored by the Monona Natural Step with support from Sustain Dane, groups that would like to see this change. 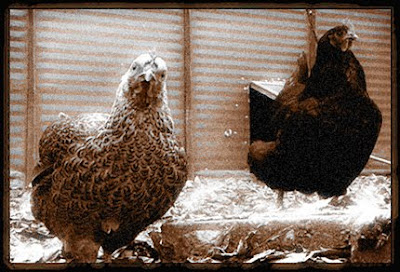 Tashai recently spoke about the upcoming event on the Forward Forum radio program, her second appearance on the show in as many weeks. Hosts John Quinlan and Stephanie Woods asked her to phone into The Pulse, 1670 AM WTDY in Madison to give listeners the details on the screening.

News of the screening is also getting some notice in the blogosphere by Monona Doug and Thomas over at UrbanChickens.net 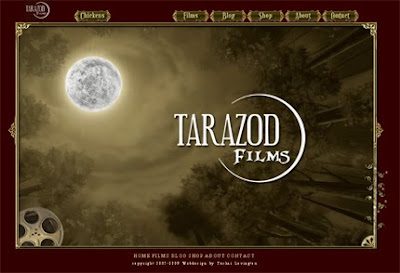 Posted by Anonymous at 8:31 PM 0 comments

Radio hosts John Quinlan & Stephanie Woods invited us onto their show Forward Forum today which aired on The Pulse, 1670 AM WTDY in Madison and streamed online at http://wtdy.com. The topic? Mad City Chickens and its upcoming DVD release. 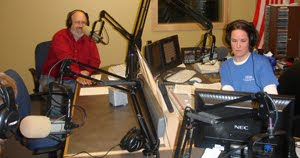 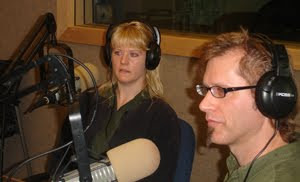 One of the calls that came in was from Margaret McMurray, granddaughter of Murray McMurray, the founder of the well known rare breed hatchery in Webster City, IA. Margaret makes an appearance in the film, introducing the McMurray Hatchery behind-the-scenes tour segment. Listen to the radio interview (mp3 download).
Posted by Anonymous at 8:15 PM 0 comments