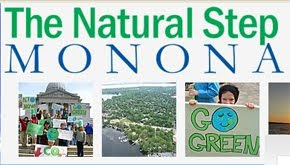 City of Monona, Wisconsin currently prohibits the keeping of any backyard fowl. Monona Natural Step is a group of friends and neighbors, working to make their lives, and the life of their community, more sustainable — economically, environmentally, and socially. To that end, they’d like to see the outdated zoning laws changed to allow for a few backyard chickens.


They will be holding a public screening of the Mad City Chickens documentary as part of their Green Tuesdays Film & Lecture Series on March 10th. The film starts at 6:30pm and will be held at the Monona Public Library, 1000 Nichols Rd., Monona, WI 53716. The series is free and open to the public.
Posted by Anonymous at 9:12 PM 0 comments

Mad City Chickens is now available for public screenings. The total running time clocks in at just over 79 minutes. If you or your group is interested in scheduling a screening for your organization or the general public, contact us at: evoke@tarazod.com. There is a modest public presentation licensing fee to screen the film. 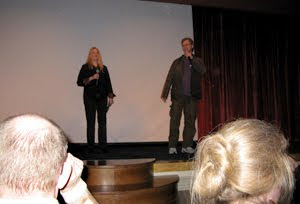 Movie theaters, art houses, universities, high school and collage theaters, libraries, banquet halls, senior centers, churches and coffee shops are just a few of the venues that often are quite amenable to opening their doors to independent film such as this. 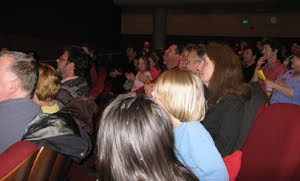 We haven’t yet turned our full attention on the promotion of the film (as we've has been kept quite busy just finishing up the DVD extras before it was sent off to the replication house). Nonetheless, the interest is growing. Mad City Chickens is currently booked for screenings in Toronto and Victoria, Canada (March & April); Moscow, ID (July); and Monona and Milwaukee, WI (March &April). Details coming soon! 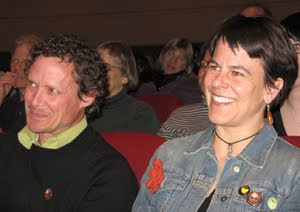 We’ve also been contacted by interested folks in NYC, Santa Barbara, San Francisco, Portland, Philadelphia, Ann Arbor, Louisville, KY, Brownsville & Austin, TX, Longmont, CO, Lawrence, KS and several other cities in the US, Canada and the UK. No screenings have yet been scheduled in these areas, but we’re working on it.
Posted by Anonymous at 10:00 AM 0 comments

A recent article on urban backyard chickens and the changing laws appeared in the New York Times, and our Mad City Chickens documentary got a small mention. 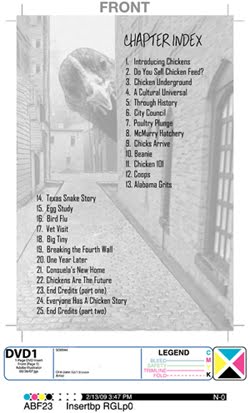 Posted by Anonymous at 7:43 PM 0 comments 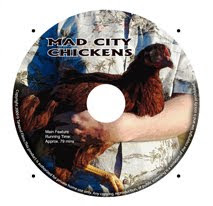 Posted by Anonymous at 1:24 PM 0 comments 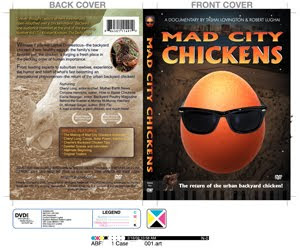 Here is a first glimpse of the artwork for the Mad City Chickens DVD cover.

Posted by Anonymous at 8:00 PM 0 comments

While we wait for the replication house to create the glass mold of the Mad City Chickens master disc, we are overseeing the redesign of our website. The relaunch of the site will include among other things a new look, a new logo, and a new store page where the Mad City Chickens DVD can be purchased.

The authoring has been completed, the master files have been sent to the replication house, and the official DVD release of the Mad City Chickens documentary is fast approaching. We don’t have an exact date yet (depends on the speed of the replication house), but we expect to have the DVD available for purchase sometime in mid-March.

That’s three years in the making…yea baby!
Posted by Anonymous at 1:14 PM 0 comments

You can’t please everyone, but we can try to please most. Response to the Mad City Chickens documentary has been overwhelmingly and enthusiastically positive.

We were recently contacted by Jason Whyte, a writer, reporter and photographer for efilmcritic.com, a worldwide film review website.

Efilmcritic.com is one of the largest film review sites on the internet (2 million hits a week, and 150,000 unique readers weekly), and provides the most complete film festival coverage anywhere found on the internet.One of Jason’s regular areas of coverage is the Victoria Film Festival so he wrote us requesting an interview in regards to the screening of Mad City Chickens. You can read the complete interview here.
Posted by Anonymous at 1:08 PM 0 comments

The people of British Columbia are on the cutting edge of the sustainability movement, and that movement includes the return of the urban backyard chicken. Mad City Chickens plays its 2nd BC fest by screening tonight at the 2009 Victoria Film Festival. If you’re in the area, hop a ride on the ferry over to Victoria and take in the show! The screening is sold out, but Rush Line attendees will almost always find their way into the theater. 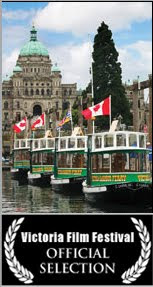 Mad City Chickens screens 7:00 pm at the Odeon Theater.
Posted by Anonymous at 7:02 AM 0 comments