As we draw closer to the spring 2009 DVD release of the Mad City Chickens documentary, we’re also nearing completion on the many DVD extras that will accompany the film. Two sneak peaks have been uploaded today to our Tarazod Films youtube page. 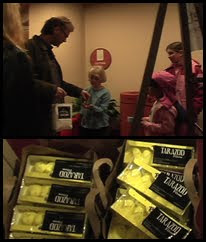 The first clip (shot by our friend Joe Fleischhacker) is behind-the-scenes footage of the MCC premiere at the 2008 Wisconsin Film Festival. We had help firing up the sold out crowd in the form of free goodies including buttons, chocolate eggs and boxes of peeps. 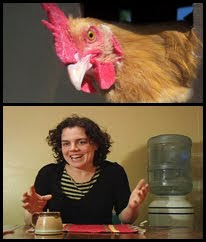 The second youtube vid is one of the many deleted scene extras. With over 40 hours of raw footage from the original tapes, there was just no way to fit it all into the final 80 minute film. So DVD viewers will be treated to a plethora of never-before-seen chicken stories. Hear Elizabeth Arth’s tale of how her pullet named Dolly suddenly turned into a rooster in her backyard.
Posted by Anonymous at 12:55 PM 0 comments

The 3rd Annual Urban Issues Film Festival starts today in Nanaimo, British Columbia, Canada, and Mad City Chickens is one of the headliner films. The fest takes place at Vancouver Island University. The focus is focused on urban planning and the issues associated with it. With the immense popularity now of the backyard city chicken movement, it’s a subject matter whose time has come.
Posted by Anonymous at 7:52 AM 0 comments

BC Film Fest nears: MCC gets blogged by the City Farmer

Michael Levenston of the Vancouver-based City Farmer News blog did a write-up on our recent Wisconsin Public Television appearance with a plug for Mad City Chickens which will screen in the upcoming Urban Issues Film Festival in Nanaimo, British Columbia.


Where: Vancouver Island University
When: November 21, 2008.

Posted by Anonymous at 8:45 PM 0 comments