While the Mad City Chickens documentary is currently being submitted to festivals across the U.S., Canada, and Australia, there is a fascinating occurrence happening in these countries. The interest in backyard chickens is exploding! It’s an international phenomenon. From Seattle to New York, Vancouver to Toronto, and London to Sydney, urbanites are taking a keen interest in keeping backyard poultry.

We have been contacted by people in communities all across the US and Canada. Old zoning laws are falling by the wayside as cities become more chicken-friendly. Ann Arbor is the latest community to pass pro-chicken laws, allowing hens to be kept in backyards. Others municipalities like Fort Collins and Lawrence are currently in the heat of the battle. One thing is for sure, the city chicken isn’t going away.

Read an article by Judy McGovern from the Ann Arbor News written prior to their city council vote. Mad City Chickens gets a mention.
Posted by Anonymous at 8:39 PM 0 comments 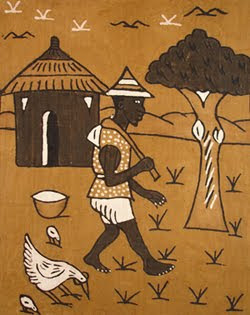 The chicken is a cultural universal. Practically every society keeps chickens. In one segment of the Mad City Chickens documentary, we hear poultry tales from Mexico, Gambia, France, and Sri Lanka…everyone has a chicken story.

Woven African tapestry from the Gambia depicting chickens as a form of wealth
Posted by Anonymous at 11:55 AM 0 comments

We have been invited by Mary Pokorney-Donelan, the producer of a new series at Wisconsin Public Television titled The Director’s Cut . The program will focus on Wisconsin films and filmmakers and will be a combination of running clips of the films and discussions with host Charles Monroe-Kane.

The Director’s Cut will air on WPT’s digital channel, The Wisconsin Channel, and Saturday nights on the analog channel. The episode on Mad City Chickens will be taped later this summer.
Posted by Anonymous at 9:26 AM 0 comments

Email ThisBlogThis!Share to TwitterShare to FacebookShare to Pinterest
Labels: mad city chickens, press and reviews
Newer Posts Older Posts Home
Subscribe to: Posts (Atom)
Tarazod Films & Media LLC is an independent production company. We produce both the documentary and narrative film as well as a range of commercial work.