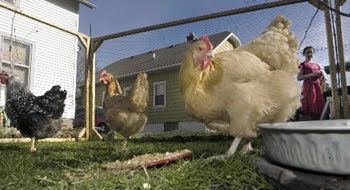 “Backyard chickens have become popular in Madison, boosted this year by a documentary on the phenomenon, Mad City Chickens, which debuted at the Madison Film Festival in March.”

The piece was authored by reporter Lynn Welch of the Capital Times, then picked up nationwide by the Associated Press.
Posted by Anonymous at 3:06 PM 0 comments

We were having some routine maintenance done to our blog site, when it experienced a meltdown. The result was a loss of all content from the last year! Luckily, 24 hours later, it has now mostly been recovered, although we are still without our blogroll and sidebar links. We hope to have them restored shortly.
Posted by Anonymous at 11:13 PM 0 comments

There are over 80,000 film festivals worldwide. The top 15 or 20 are the most difficult to get into, but they of course offer the best exposure and chances of selling a film.

As the season progresses, more festivals are opening up their “call for entries”. We are continuing to submit Mad City Chickens to film fests across the U.S. and Canada, first to some of the major venues to be followed shortly by numerous others in well chosen cities. Unfortunately, it can take months to hear back as to whether a film has been accepted or not.

Hurry up and wait.
Posted by Anonymous at 12:33 PM 0 comments

Not All Producer Reps are Created Equal!

A Producer Rep can become attached to a film at any stage in the project, from development, during production, or simply at the distribution phase. For filmmakers, the best Producer Rep is someone who feels just as strongly about the film as they do.

The problem is…are they telling you the truth? Do they actually have these connections with people in high places? Or do they just want a large (non-refundable) chunk of money up front, without caring whether the film is sold or not?

We are currently fielding calls from Producer Reps for Mad City Chickens. And it has been a very interesting stroll into the art business of filmmaking.
Posted by Anonymous at 7:52 PM 0 comments 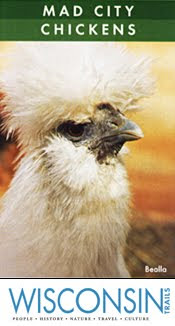 The backyard chicken craze is really catching on and the media is picking up on it. Mad City Chickens gets noticed by writer Elizabeth Wegner in the June 2008 issue of Wisconsin Trails Magazine.
Posted by Anonymous at 11:28 PM 0 comments

Today we attended a Photoshop CS3 workshop with Bert Monroy in Milwaukee. Monroy is one of the pioneers of digital art and the photo realist genius of our times.

In the Golden Age of Hollywood, studios used to employ a host of matte painters to create backdrops for sets. In the Digital Age, matte painters still “paint”, but they often do it in programs like Photoshop.

Damen by Bert Monroy (A digital painting…not a photograph…of the Blue Line at Damen Station in Chicago, the image contains over 15,000 Photoshop layers.)
Posted by Anonymous at 12:19 AM 0 comments 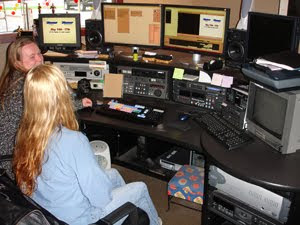 Posted by Anonymous at 9:12 AM 0 comments

The re-edit of the Mad City Chickens film is complete, and the pixelation problems that we’d been experiencing (on and off over the course of several months) are finally resolved.


Submissions to film festivals across Canada and the U.S. are now back on track.
Posted by Anonymous at 9:01 PM 0 comments

Mad City Chickens was shot mainly in the SD (Standard Definition) format but not entirely. We did mix a number of HD (High Definition) clips into the final edit, and this has caused a slight delay in our film festival submission process. We’ve encountered some pixelation issues when compressing the film onto a standard DVD…too much information, not enough disc space. The problem will be resolved shortly, however, and festival submissions will continue.
Posted by Anonymous at 8:22 PM 0 comments