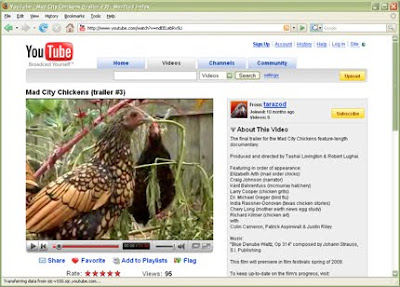 With the two earlier clips, our aim was to let it be known that this documentary on city chickens was going to be anything but ordinary. Posted nearly nine months ago, trailer #1 was short and served to introduce our heavy-hitter and keep people wanting more.

Then six months ago, trailer #2 emphasized the involvement of Mother Earth News in our project as well as unveiling a blitzkrieg of compositing effects designed to entertain and hold viewers’ interest.

Todays trailer is slightly different. Our goal was to keep it simple and show the depth and diversity that is this film, Mad City Chickens. We hope you enjoy and decide to come out to see the film when it’s released.

Posted by Anonymous at 7:00 AM