After literally months of intense editing, a severe lack of sleep, and zero social life, we finally have a completed version of the Mad City Chickens documentary. With more than 40 hours of footage to work from, it proved a real challenge to hone down into a final film with a running time of 81 minutes. 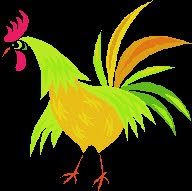 So is it done? Yes…and no. We’re very pleased with how it turned out, but at some point, we’ll be replacing some of the soundtrack with different versions of a couple songs.
Posted by Anonymous at 3:30 AM