It’s official! Mad City Chickens has begun its trek into film festival submission land. This past week was nothing less than a crazed insane rush to edit the film into the best possible form before getting it postmarked by the deadline of 5:00 pm TODAY! We made it by 3:30.

Last night we saw no sleep. Instead, we spent the 24 hours dropping in b-roll stills and stock footage onto the time line. Musical accents, ADR, dialogue tweaking. The film is good (in our opinion), but it’s not yet great. Another couple weeks of editing and a few more on-location shoots would have done wonders, but a deadline is a deadline.

We’ll keep plugging away at it as we try to return to some semblance of normal living again. (The piles of clean clothes and dirty dishes are sure signs of a deadline-style life.)

If the film is accepted, we have until the 15th of February to deliver it. But of course, this is only the beginning. The festival submission circuit starts to kick into high gear come summer, and by then, Mad City will be polished to our liking.

the Typical Tarazod Day (of late)

The submission deadline is December 31st…the first film festival submission for Mad City Chickens. The film is not done, but it doesn’t yet have to be. All that’s required is to make it finished enough to be accepted into the festival. Consequently, the last two months have been an intensity of gathering b-roll, shooting pick-ups, recording ADR (Additional Dialogue Recording) and editing. Lots of editing.

Yesterday was a typical day: The morning started by going over the first 30 minutes of the film, making notes and corrections to what must absolutely be changed or improved upon before submission. Took short breaks to email and phone several people in the film, setting up times for ADR or in some cases, initial interviews (there’s still a few short segments yet to be filmed). This went well into the afternoon before having to change gears.

By 4:00 pm we were loading up the van with the lights and camera equipment. Our first stop was back to Nutzy Mutz and Crazy Catz where Liz Perry would do a few lines of ADR for us.

While there, we ran into the Lynch family, the folks who adopted our two hens. (We really liked our chickens, but with the film now consuming ALL of our waking moments, we found ourselves in the unusual predicament of having to locate a home that would have the time to care for them.) 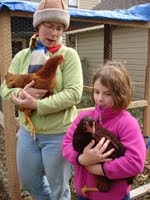 It’s 8:00 pm as we pulled into the snow-covered drive of Susan Troller, a reporter for the Capital Times Newspaper. Susan would speak with us on camera about the article (Page 1, Page 2) she wrote on Liz Perry and Consuela, the factory farm hen that was found deposited at a local landfill.

10:00 pm. It’s dark, 14 degrees Fahrenheit, and snowing. We take a wrong turn and get lost out on the back roads of rural Wisconsin. It’s difficult to keep our eyes open as the adrenaline subsides and exhaustion returns.

11:00 pm finds us back in the editing bay capturing the footage we just shot today. Disaster! The camera was making some unusual noises during filming at Susan Troller’s. We thought it might be just the coming-in-from-the-cold, but now it appears there may be something wrong with it. The images we shot are all jittery and jumpy. (Not a good thing, especially since we still have three more shoots scheduled before the end of January…one all the way down to Austin, TX.)


We spend the next several hours taking the Susan footage into Adobe After Effects to correct the issue. Disaster is averted, but it’s now 3:00 am! We call it a night, but not before taking a peek into one of Tashai’s pet snake cages. Saffron the captive-bred ball python has finally shed her skin and is READY to eat. We sit in strung-out silence as Saffron has her meal.

A few hours sleep and today’s another day!
Posted by Anonymous at 8:52 PM 0 comments 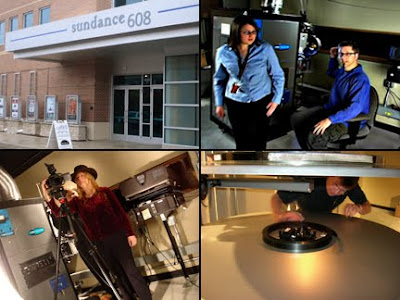 Today, we had the opportunity of shooting a scene at Sundance Theaters in Madison for our upcoming film, Mad City Chickens. (For those of you that may be asking why we are still shooting when we are so deep into post-production on this project, all we can say is…wait and see.)

We were led to the upper level by manager, Sarah Simonds, where we set up in one of the state-of-the art projection room areas. Expert projectionist, Hal Theisen, threaded some film for us and cranked up the projector so we could do the shoot.

Special thanks to location scout Janet Kjelland and all the wonderful Sundance Madison crew.
Posted by Anonymous at 10:29 PM 0 comments 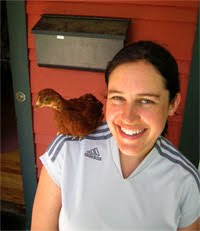 Fellow chicken owners continue to assist us by supplying dynamite B-roll images to be used in our film. Stills of hens, roosters, eggs, coops…

Photographer Kristy Hanselman recently shared a profusion of chick pics for us to choose from.

Thanks Kristy!
Posted by Anonymous at 4:31 PM 0 comments

We’ve revamped our Mad City Chickens website. And more still to come in the weeks ahead.
Posted by Anonymous at 1:23 PM 0 comments 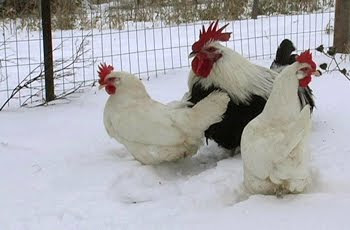 A freeze frame from our movie.
Posted by Anonymous at 11:06 AM 0 comments