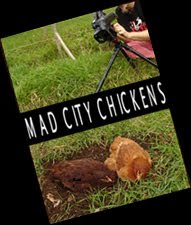 The Mad City Chickens movie was set in motion back in the summer of 2005 outside Madison, Wisconsin when we attended a gathering hosted by two of the founding members of the Mad City Chickens group, Alicia Rheal and Brian Whiting. It was a conversation with them and other backyard chicken owners that hatched the idea for the film–a short film–no longer than ten minutes.

Now over two years later, the feature-length project (approx. 90 minutes) is nearing completion. A finished, although not final, version will start the submission process to film festivals before the end of the year.
Posted by Anonymous at 11:33 AM