The Weight of Place

Last night we watched the movie Stranger Than Fiction with Will Ferrell. Many of the locations felt so familiar to me. The director avoided showing well-known skylines or landmarks but still…

At one point I blurted out “Hey! That was filmed at my University.” We had to do a quick rewind to catch missed dialogue, but it was indeed filmed entirely on location in Chicago and at my old stomping ground—the University of Illinois. The U of I at Chicago had a very specific…aura…if you will. Most of the buildings had been built during a time of rioting and unrest in the city. Many windows (if any) were like arrow shafts in old castles. And ah yes, the elevated concrete walkways added to the Medieval architectural feel.

The film/photography dept also had a kind of fortress appeal to it with some of the best nooks and crannies for catching up on much needed sleep. 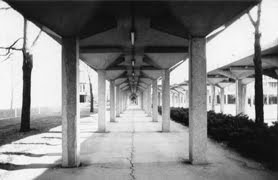 Somehow it made me feel more connected to the story. It had more weight. I had actually been in those very same places working out my student films. It left me with a nostalgic feeling. That’s possibly something to keep in mind when deciding whether to build sets or use real locations. The weight of place.

Posted by: Tashai
Posted by Anonymous at 10:51 PM